We are thrilled to announce the West End transfer of  Bernadette Robinson in Songs For Nobodies for a limited 7 week run. The production had its European première at Wilton’s Music Hall earlier this year and opened to wide critical and audience acclaim. It opens at the Ambassadors Theatre on 10 January, with previews from 9 January and running until 23 February.

Read more about it on our press release. 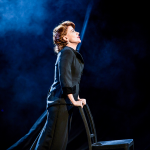