RGM Productions are proud to be the international bookers and managers of  the award-winning West-End smash-hit musical, Everybody’s Talking About Jamie, produced by Nica Burns.

Garry McQuinn, MD of RGM said: “This is the most exciting new British musical to hit the West End for years. We’re proud and happy to be working with Nica and Laurence Miller on the many international opportunities that lie ahead.”

With ‘songs that have the wow factor’ (The Times) by lead singer-songwriter of The Feeling, Dan Gillespie sells, and ‘hilarious’ book and lyrics ‘with delightful punch’ (Whatsonstage), by writer Tom McRae, this funny, fabulous, feel-good musical sensation has been wowing audiences and critics alike. 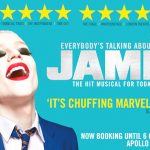